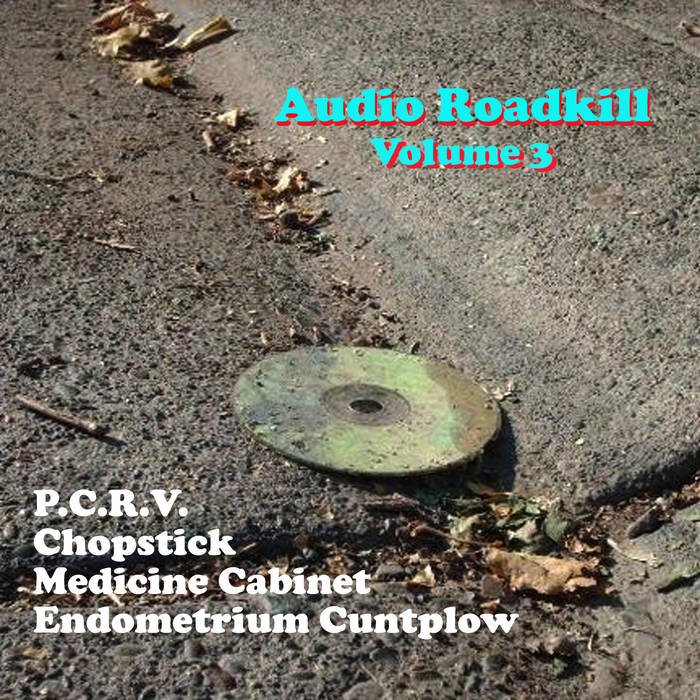 The Audio Roadkill series was started in 2008 to combine experimental and outsider sound artists with a photography series by Lob Instagon in a collection of limited edition releases. These photos are of FOUND castaway CD's that have be discovered on the roadside.. Audio Roadkill..

Each volume features 4 Experimental Audio Artists selected by Lob for the series...3 from California, and one from out of State, with all tracks being exclusive to the release.

THIS 3RD VOLUME follows the last one by 5 years, but contains the same elements and thoughtful presentation of the photos and sounds Lob has continued to combine for a conceptual artistic experience. Each track has a different photo of the same found item, and were taken in the Sacramento area. Artists included are PCRV (Billings,MT), Chopstick (Sacramento,CA), Medicine Cabinet (Tracy,CA), & Endometrium Cuntplow (Northridge,CA).

All tracks are exclusive to this release


AUDIO ROADKILL is an ongoing series and SUBSCRIPTIONS ARE AVAILABLE. There are 2 previous volumes ..and volume 4 could happen later this year. IF you would like information on Subscribing to this series and being sure you get your copy as soon as they are released. ...send email asking for info to: audioroadkill@tif.org

All photos by Lob Instagon.
Produced, collected, and arranged by Lob Instagon for TIF
Thanks to all of the artists that participated in this volume....Matt, Andrew, Marc, & David!! Also thanks to CJ at Mad Moth Media for all of their continued help. Thanks to the subscribers that have been waiting for this volume for 5 years...the wait is over!